Water, water, everywhere…but drinking it could lead to sickness or worse.

One of the first things that people need in any emergency is safe water to drink. Even in parts of the developed world where clean drinking water is taken for granted, an environmental catastrophe can render the most sophisticated of water supply systems useless.

The tragic irony is that quite often the problem is not that of having too little water, but that there can be too much and this subsequently leads to contamination of “safe” water supplies.

A good example is the recent floods experienced in Zimbabwe. Excessive seasonal rains have resulted in flash flooding that has washed away roads and houses and contaminated boreholes. Because of the length of time needed to repair infrastructure – new boreholes need to be dug – with each day that passes the risk of water borne diseases spreading rises exponentially.

There are many organisations that attend to this need, each with their own approach, but the Rotary club of Chelwood Bridge has come up with a concept called the Water Survival Box. In partnership with the Zimbabwe Red Cross, 400 of these boxes have been shipped and by the time you read this article, they will already be in use.

In addition to a GrifAid® Family Aquafilter, the box also comes complete with a range of items aimed at helping a family who has lost everything to survive the aftermath of most natural disasters. But unlike an ambulance that speeds its way to an emergency room, most aid deliveries do not come with flashing lights and sirens. The hard truth is that the logistics of getting aid to where it needs to be is often harder than getting the aid together in the first place. Customs bureaucracies seldom differentiate between goods that are for commercial import and aid that is destined to save lives.

That is where the hard won experience and expertise of people like Hugo Pike, from World Water Works, the charitable company started by Chelwood Bridge Rotary Club, makes all the difference.

“I know of situations where aid has sat for months in clearing houses,” Hugo says as he explains the history of The Water Survival Box. “Sometimes it can wait so long that by the time it is cleared, the urgency has passed and it is no longer needed. So we knew early on that part of our job was to make it as easy as possible for the aid to get through customs so that it could get to the people that need it as quickly as possible.”

Hugo’s organisation took a practical approach to refining their delivery strategy, even if it involved some slightly unconventional thinking, “We put ourselves in the custom agent’s shoes and asked ourselves what would make his life easier?”

Originally, the boxes that Hugo’s Rotary Club shipped would comprise of a standard plastic box with enough chlorine water tablets to provide a short-term supply of purified water. In addition, the box was then filled with other items that were donated by the public and which were intended to help families cope with the immediate hardships that came with being made homeless.

“We had a list of items that needed to go into each box, but often it was difficult to match up what was donated with what needed to go in the box. In our first campaign to support the Indian Ocean tsunami in 2004 we raised about £110 000 in cash donations but many of the donated items which we valued at between £200,000 and £300,000 ended up being given to Save the Children because we couldn’t use them.”

But even if the items were suitable, another problem arose. “Even though the list was standard, the items that were donated were hardly ever the same.” So whilst the list might have said “4 drinking cups”, with donors digging around in their cupboards or picking something up from the supermarket bargain bin, you can begin to see how consistency might have been a problem. Apart from the difficulty of standardising the packing of items which varied from box to box, the variation between boxes created another, much more significant problem. “Imagine yourself as a customs officer. 3000 boxes arrive – they all look identical from the outside and the manifest says they all contain the same things, but when you open them you find that each one looks different – you have little choice but to then check every single one.”

Hugo says that they knew then that they would have to change their strategy, so in addition to updating their water purification system from chlorine tablets to a ultrafiltration membrane GrifAid® Family Aquafilter, they also changed the way their boxes were configured. “Water Survival Boxes are now identical – we buy everything that goes into them so that we know that the contents are consistent. This has meant that we have been able to reduce the size of the boxes, even though they contain even more than before because we don’t have to allow for any variations.”

So, has it made a difference?

“We average about 5 or 6 international shipments per year and since 2006 when we first standardised our boxes we have not had a single hold up with respect to import customs arrangements.”

The system has proven so successful that World Water Works have now teamed up with School in a Bag, which provides school supplies to children, and which also uses the standardised contents approach to speed up distribution. “School in a Bag were already well established in providing aid to underprivileged communities around the world but they also wanted to make an impact in disaster scenarios where children often lose everything and this can mean that their education gets disrupted or worse.” By piggy backing on the Water Survival Box, the School in a Bag also now ships to many of the same disaster areas.

For people like Hugo who have spent years getting aid to people who need it, speed of delivery is just as important as the content of the aid being provided. And now that they have refined their system, their response times are pretty rapid indeed. “Usually from the time we receive an initial enquiry, to the time the aid is on the ground ready for distribution, we would expect the whole process to take between 6 and 12 days.”

In Hugo’s office there is a map of the world with coloured pins that show where all the aid has been sent since they started back in 2004 -to date 12,961 boxes have been distributed worldwide. For a process that has been on-going for over a decade, you would expect the pins to vary in type and size, but apart from their colours (each year has a different colour), they are all the same, just like the thousands of Water Survival Boxes they represent.

From looking at the map it is clear that by following a simple idea through to its natural conclusion, this small organisation of Rotary volunteers has managed to achieve a huge amount with relatively few resources. In the process, they have also demonstrated that consistency and an understanding of something as mundane as shipping logistics can make every bit as much of an impact as the brightest flashing lights and the loudest sirens.

If you want to know more about the Water Survival Box, or if you would like to support World Water Works, the please visit their website: www.worldwaterworks.org 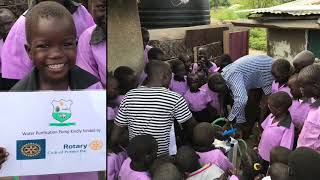 Filters on their way to Cameroon and Haiti